Black Jack (or Blackjack) is one of the most popular casino card games. Black Jack is sought by those players, who are not content with the result being dependent solely on chance. On the contrary they may and want to influence their winning chances by appropriately chosen strategy. By the best way of play they can even gain an advantage over the dealer, which is rarely seen in most of the casino games.

If there are more players playing Black Jack, it may happen (or it happens actually) that the dealer beats some player(s) and loses to the other(s) at the same time. Each player wins or loses their own individual bet. The minimum and maximum bet is usually shown near the Black Jack table.

The card values in Black Jack are slightly different from Twenty One. The cards 2 to 10 are worth their face value, while Jack, Queen and King are counted for 10 points. Ace can be worth 1 or 11 points at discretion.

Black Jack is a hand (or a combination) of an ace and ten or any figure (J, Q, K that are worth 10 points), the color plays no role. Examples of Black Jack:

Deal of Cards & Course of Play in Blackjack

Once the players place their bets on the designated boxes in front of them, the dealer first deals one card to every player including him- or herself in the clockwise order and after that one more card is dealt to the players only. All cards are dealt face up, that is visibly for all players, the dealer and the onlookers.

After that the dealer asks the players in the same order about their intentions and bets and he or she also announces the totals of the cards. Apart from Twenty One there are new possibilities how to continue in the game of Black Jack: split and double. The dealer follows player’s instructions until he or she decides to stand or busts. The bet is lost immediately in case of bust.

As soon as the dealer serves all players he or she deals him- or herself a second card (or even more cards). Then the dealer grabs losing bets, pays out winning bets and returns tie bets. For a completion it is needed to say that in some Black Jack variations (or modifications of rules by a casino), especially when only a single deck of cards is used, the dealer deals the cards face down (invisibly) or he or she deals him- or herself two cards straight away, while one of them is face down.

Let us start with the easier, i.e. the play of the dealer who, unlike the players, must stick to the strict rules to hit (i.e. to take another card) or stand:

In some casinos the dealer must take another card at soft 17. Of course if the dealer busts, he or she loses and pays out all players in the ratio 1:1. The dealer cannot double or split.

The players in the game of Black Jack have more possibilities than the dealer.

Stop or hand over the turn when the player is satisfied with their total or do not want to risk bust by taking another card.

Double the bet, receive one more card and stop the turn. Some rules enable to double only with one card.

The game can be split if the player has two cards of the same value, while a standalone game is played with each of the cards. The initial bet needs to be doubled; therefore split is a specific manner of double.

If the player does not trust their two cards after the deal, he or she may surrender (later surrender is not possible). The dealer returns one half of the bet to the player, the other one falls for casino. Sometimes it is not possible to surrender when the first card of the dealer is 10 or Ace and when he or she would get Black Jack. This rule is also known as late surrender. If it is possible to surrender before knowing that the dealer would get Black Jack, we talk about early surrender.

If the dealer’s first card is Ace, the player(s) can insurance against Black Jack (the total 21) before he or she takes another card. The insurance is paid 2:1 and the maximum insurance is a half of the bet (so that it covers the whole bet).

The basic Black Jack rules can be modified in various casinos. The modifications mostly deal with the possibility to double or (re)split.

One card only for ace split

If the player is dealt two aces and decided to split the game, he or she receives only one card for each ace and the turn is over. Ace is, of course, worth 11 points in this case.

If the player splits the game and the next card has the same value as well, he or she can further re-split the game. Theoretically there can be three or four standalone games. Re-split for aces is usually not allowed.

No double after split

Double may not be allowed after the game has been split.

Result of the Game

If the player has the higher total value of his or her cards than the dealer, he or she is winning and paid out 1:1.

If there is a standoff, i.e. the total values of the player’s and dealer’s cards are equal, the bet is returned to the player.

If the dealer exceeds 21 (busts / breaks), he or she pays out all players that have not gone over 21.

While the player may choose how to proceed in the game, the dealer’s play is given and cannot be deviated. This can be utilized by the player to optimize their play and make the best decisions based on his or her hand and the first card of the dealer. This strategic way of play is referred to as basic strategy in Black Jack. It is based on mathematical and probability models.

The following basic strategy (model) is valid, when: 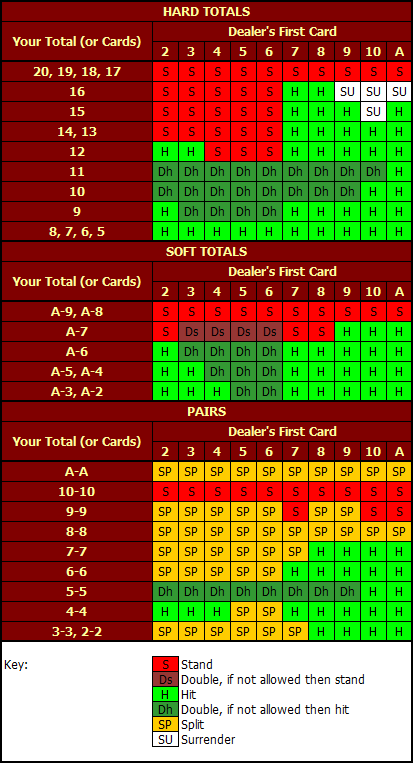 How to use the strategy above? The two cards in your hand and the dealer’s first card determine the coordinates of the best strategy – your reaction. For instance: if you have hard 15 (e.g. 8 + 7) and the dealer’s first card is six, then the best thing you can do is to stand (S).  If the dealer had seven, then it would be better off to take another card (H – Hit). The strategy is based on mathematics and gives you the best chance of success in the long run.

Another example: If you have Ace and seven (A-7) and the dealer’s first card is three, four, five or six, then it is worth doubling your bet, if the rules allow that, if not then the best decision is to stand (Ds – Double, if not allowed then s – stand). If we moved one row down in the table of soft totals, i.e. we had A-6 in the hand and the dealer’s first card was 3 to 6 again, then the best strategy would be to double the bet again, but if the rules did not allow that, it would be best to take another card (Dh – Double, if not allowed then h – hit).

And the last example: If you have two cards of the same value (or a pair), then the best strategy is to split the game in most of the cases (SP – Split).

The Black Jack basic strategy gives good prospects for most Black Jack variations (the rules can slightly differ from casino to casino) in the long run, while the house edge ranges from 0.5 to 1%. The house edge is very low compared to other casino games; however there are techniques that can press the house advantage to as low as zero or even turn it around into the player’s favor.

One of the advanced strategies in Black Jack is to watch the cards that have been dealt or even to count them. If you e.g. figure out that there is a great number of tens and aces in the deck (you can see and remember the cards of all players incl. the dealer), you may adjust your play and bet higher amounts or double more often as there is growing probability to get some high total or even Black Jack.

The card counting is a relatively demanding technique that promises the best results. The player can get the edge up to 2% over the dealer. The counting of cards is easier and more powerful the smaller is the number of card decks. When there is a single card deck only, casinos often insist that players do not show their cards to each other. The more card decks, the higher is the house edge.

→ Ben Affleck banned from playing Blackjack at the Hard Rock casino (3 May 2014).

The card counting or remembering is a quite legal technique, which is, for understandable reasons, not appreciated by casinos. On the contrary various memory or record devices are considered a fraud and prohibited. It is not easy for a player to count the card from the mental point of view. Such player must be very careful not to reveal him- or herself. The course of the play is watched not only by the dealer but by a team behind the camera too. If the player is revealed he or she becomes persona non grata not welcome any more and blacklisted.

Black Jack, similarly to Poker (see the poker tournaments) can be played in a tournament manner. On the beginning each player receives the same amount of chips and the goal is to get as many chips as possible. Based on the number of players there can be multiple rounds or tables. The principle of the tournament play is to eliminate or top the opponents in terms of chip amount. It can be done in two ways. On each table only one or two player(s) with the highest amount of chips go on, or on the contrary, those with lowest amount of chips at a specified point are eliminated, e.g. after five rounds.

The best strategy in tournament Black Jack can vary from the classic game. The great importance consists in the amount of bet – if you manage to win some high bet, you may get a great edge over the opponents, but if you lose a big one, you can face elimination. As in poker tournaments casinos charge a commission.