Completing a Number in Roulette

Completing a number can be made by nine chips – see the figures below. The win depends on whether the winning number is situated in the middle or on the edge.

Figures – Completing a Number in Roulette 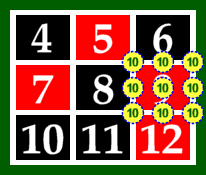 The Final Bet or Finale (from French) is made on the last digit of a number. For instance Final Four means that you bet on the numbers 4, 14, 24 and 34. The bet on Final 1–6 requires 4 chips, while Final 6–9 gets along with just 3 chips.

Sometimes you may feel that a ball has tendency to fall into some pockets of the small wheel of the Roulette more frequently. The wheel of Roulette is manufactured with high precision. However one cannot cut out some microscopic inaccuracies. This circumstance can be utilized by betting on adjacent numbers (or so called Voisins in French).

There can be three more special bets on the French wheel, namely:

The Wheel of the French Roulette divided by Voisins 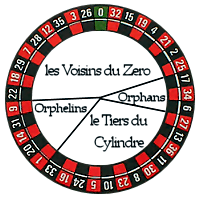